Ohio trio CAAMP are headed to Stage AE on Thursday 29th November 2018 on their Boys Tour! The indie-folk band bring heartfelt Americana-tinged songs to the stage, with smokey-voiced passion and banjo-licked melancholy reminiscent of Bon Iver or Ray Lamontagne… A joy to see live, this trio are authentic and talented, with integrity and warmth in every note! 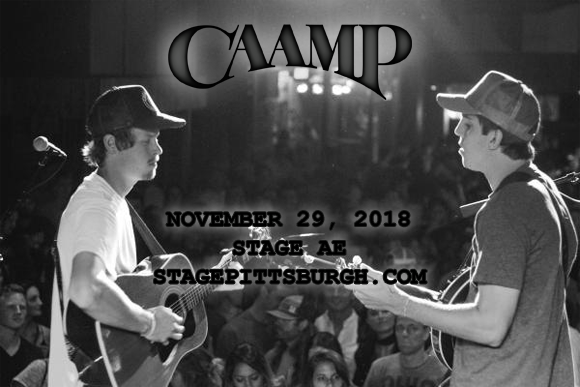 Indie-folk band CAAMP formed in Columbus, Ohio by childhood friends Taylor Meier and Evan Westfall. With songs written on the guitar and banjo, the duo began making music together in 2012, forming CAAMP and beginning to perform under the name in 2015. They released their debut album independently in 2016 – a self-titled record that found popularity on Spotify. Later that year, Meier and Westfall decided to add a third member to the band, bassist Matt Vinson. The now three-piece band released its sophomore record in July 2018, Boys, which is a two-part LP.