What do you get when you cross Boy bands and Hip-hop? You get the internet’s favorite band! Brockhampton, the Here Right Now Tour is coming to Stage AE on Sunday, March 27th, 2022. With very special guests Jean Dawson, Paris Texas, and HVN. Grab some tickets right now, this is going to be one of your last chances to catch Brockhampton live! After the release of Roadrunner, Kevin Abstract announced that the band are bringing one more album in 2021, and that it will be their last! 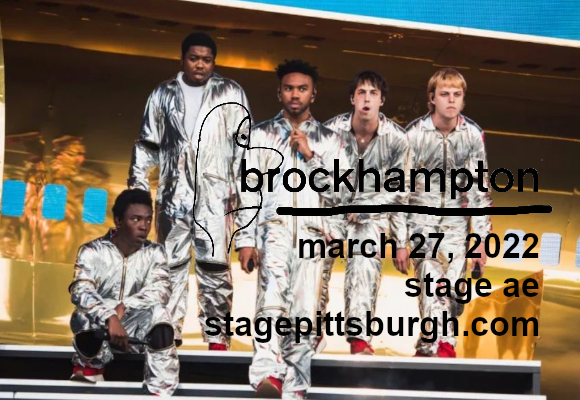 Brockhampton, is a California-based American hip-hop collective formed in San Marcos, Texas in 2015. They were founded on the Internet forum KanyeToThe, leading them to be described as, “The Internet's first boy band”. They released their first mixtape, All-American Trash, in 2016, their first album, Saturation, in June 2017, their second album, Saturation II, in August 2017 and followed it with, Saturation III, in December 2017.
It was their 2018 album, Iridescence, that finally gained them a number 1 on the Billboard 200 and the album also got them nominated for a Brit Award in 2019 for Best International Group. Their fifth studio album, Ginger, came out in 2019, debuting at number 5 and climbing to number 3 on the Billboard 200 chart.
The latest and sixth studio album, Roadrunner: New Light, New Machine, came out in April 2021 following a number of non-studio singles that were put out during the pandemic. The album came in at number 11 on the Billboard 200, and received favorable comments from critics, with AllMusic saying, the album served as a "masterful group therapy session, picking up the broken pieces of life and uplifting with cautious optimism."