Vocal powerhouse Brittany Howard comes to Stage AE on Wednesday 10th June 2020 as part of her debut solo tour! The Alabama Shakes frontwoman is promoting the release of her Grammy Award-nominated album Jaime, and will be performing songs from the critically acclaimed LP, as well as from her side projects Thunderbitch and Bermuda Triangle! Anyone who has seen Howard perform knows to expect something truly electrifying – the artist has a rare, vibrant, captivating energy on stage that makes for something entirely unforgettable! 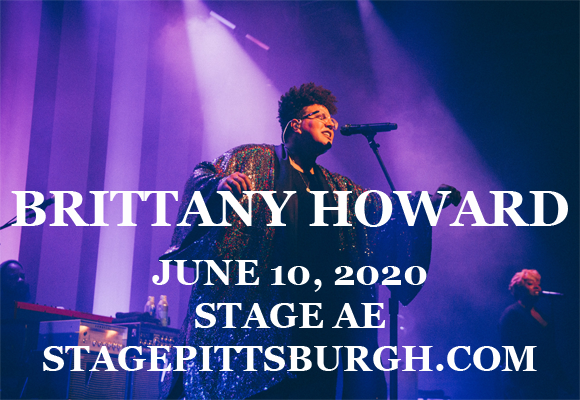 Best known as the lead vocalist, guitarist, and main songwriter of blues-rock band Alabama Shakes, as well as the bands Thunderbitch and Bermuda Triangle, Brittany Howard is an American musician, singer, and songwriter. With Alabama Shakes, she has won four Grammy Awards from nine nominations, finding success with both their first album, Boys & Girls (2012) and Sound & Colour (2015). In 2015, Howard was named the recipient of Billboard's Women in Music "Powerhouse" Award. She made her solo debut in 2019 with the critically acclaimed album Jamie, which hit the top three of the US Alternative, Americana/Folk, Independent and Top Rock Albums charts, and the top 15 of the Billboard 200 and Rolling Stone Top 200. The opening song of the album, "History Repeats", received two nominations at the 62nd Annual Grammy Awards, for Best Rock Song and Best Rock Performance.