Are you ready for Black Label Society?? These metal heavyweights are hitting the road again in 2018 with their brand new album “Grimmest Hits”!! Joined by Corrosion of Conformity and Red Fang, they’re making their way to the Stage AE on Wednesday 7th February 2018!! Tickets available now – get yours while they last!! 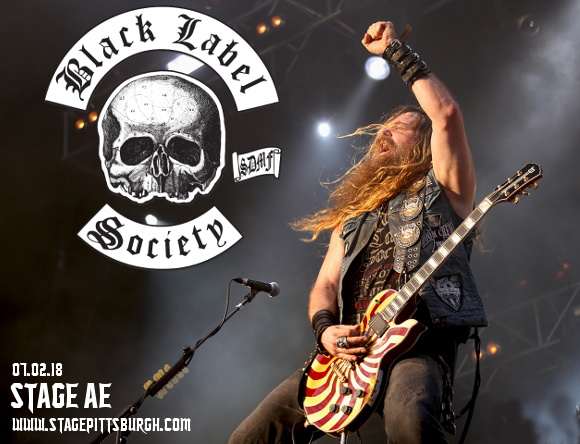 With most of 2017 occupied by the Experience Hendrix Tour, Zakk Sabbath, and even some highly anticipated dates rejoining the Ozzy Osbourne band, it’s been a busy year for Zakk Wylde, but the Black Label Society have still found the time to pull out another album. “In between the breaks and in between my nail appointments, the shaving of my legs, we've actually made another Black Label album,” the legendary guitarist joked in an interview. The new album is due out January 19th.

Joining them on the road are sludge metal giants Corrosion of Conformity, who made news in 2014 when they reunited with guitarist and vocalist Pepper Keenan for a new album and tour. Fans eagerly await the news of an upcoming release – it could be as soon as this tour! As for stoner metal act Red Fang, they’ll be joining the slog with their recent 2016 album, “Only Ghosts”.

Get ready for a night of heavy metal like nothing you’ve ever experienced before – get your tickets for Black Label society with Corrosion of Conformity and Red Fang at the Stage AE NOW while you still can!!