Haunting electro-RnB singer Banks comes to Stage AE on Saturday 17th June 2017, promoting her most recent masterpiece album, The Altar! The sultry songstress will be entertaining fans with her ethereal voice, relatable lyrics and sexy grooves – don't miss out on this spellbinding show! 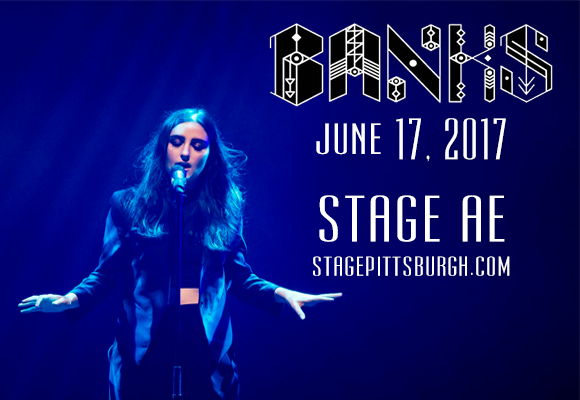 Singer-songwriter Banks first appeared on the scene in February 2013 when, after releasing just one track on a private Soundcloud account, it got picked up by DJ Zane Lowe and played on BBC Radio 1. A month later, her debut EP, Fall Over, was released, earning her a positive review from Billboard, which called her a "magnetic writer with songs to obsess over." By the end of the year, Banks was nominated for a Sound of… award by the BBC and a Brand New Nominee by MTV, and in January, Shazam included her on its list of "2014 Acts to Watch" and she was named to the iTunes list of "New Artists for 2014". Goddess, her debut album, was released in September 2014, charting in the top 20 of several countries, including the UK, Australia, Germany, New Zealand and Sweden, and launching at number 12 on the Billboard 200 in the US, selling 25,000 copies in its first week of release. Her latest album, The Altar, was released two years later, and did similarly well, debuting at number 17 on the Billboard 200.