Many-a-rock-bands have come and gone over the years, but ironically, for a band called AWOLNATION, this band has sustained their staying power in the record production and releasing front, and has kept their massive fanbase coming back to their live shows. This year 2020, they bringing on the heat of their sweltering hot rock concert on the road this summer for a tour dubbed as the "Lightning Riders tour". Joining them for a ride is singer-songwriter Andrew McMahon, for a double-headliner show at the Stage AE on Saturday 23rd May 2020. Rock music is serious business. And this show top agenda for those who rock hard. Yet hustle no more in getting tickets for they are now available here on this site with just a few easy clicks. Enter with 'buy tickets' link and book your tickets now! 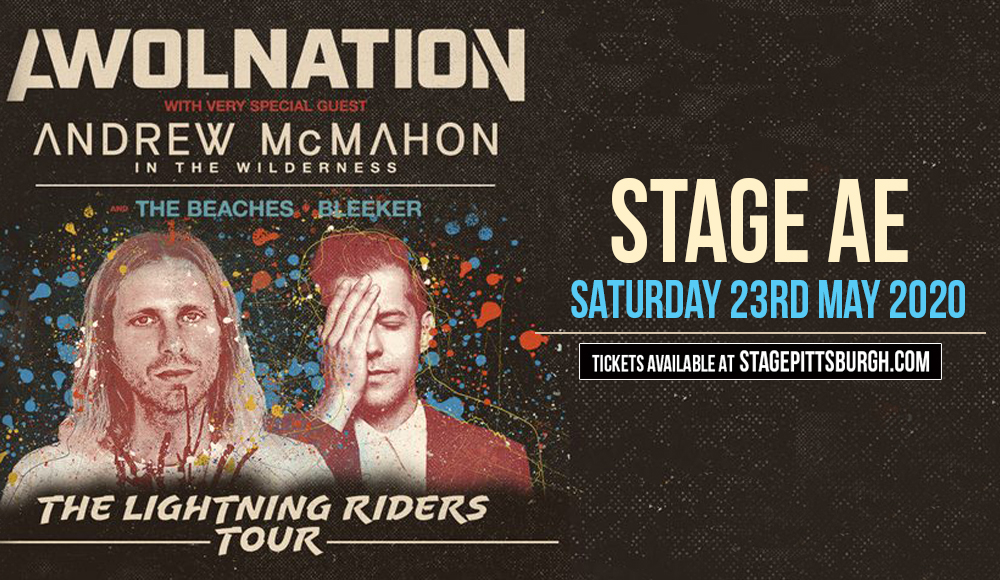 Rock music in almost all of its permutations — alternative, rockelectronic rockelectropopindie, rockdance-rockpop. AWOLNATION is a band who can pull-off this genre-blurring style seamlessly. One can witness their musical ingenuity from their records but moreso on their live shows. They feel the pulse of the crowd and feed their mood and energy. They know the precise moment when it's time to pull the trigger and slash on the whips that would drive the audience into a mad rush of headbanging frenzy. Then they pull back into a breathing space as they render raw and emotive beats and ballads.

Formed and fronted by lead vocalist Aaron Bruno, AWOLNATION has released their debut studio album, "Megalithic Symphony", on March 15, 2011. Propelling this album up the charts was their most notable hit, "Sail", which peaked at number 17 on the Billboard Hot 100, perched at number 4 on the Billboard Rock Songs chart, stayed strong at number 5 on the Billboard Alternative Songs chart. As the album sold 6,000,000 copies in the United States alone, the single has been certified 6× platinum by the RIAA and with the album acheiving platinum citation. Their career has been on a high noted since, with the succession of notable singles in the past 10 years that topped the charts, which include "All I Need," "Kill Your Heroes," "Not Your Fault," "Some Kind of Joke," "Thiskidsnotalright" and "Seven Sticks of Dynamite," and a more.

This is seriously a rock concert, and die-hard rock fans mean business in grabbing those tickets! Go and get your tickets now!