Underground hip hop royalty, Atmosphere, are headed to Stage AE on Sunday 14th October 2018! Fans have been getting excited, as the release of their recent single “Make It All Better Again” suggests that Ant and Slug may have some new material waiting in the wings for the first time in two years! The duo will be joined by Rhymesayers labelmate deM atlaS, as well as The Lioness, and DJ Keezy as special guest support acts! 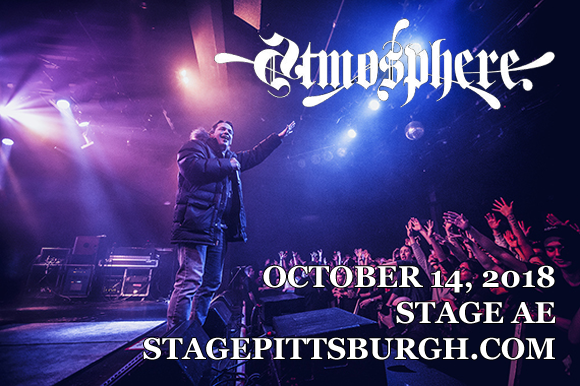 Atmosphere is an American hip hop duo, formed in Minnesota in the late 1980s/early 1990s by rapper Slug (aka Sean Daley) and DJ/producer Ant (aka Anthony Davis). In 1995, the duo formed the underground hip hop freestyle crew Rhymesayers Collective, who were known for their complex and conscious lyrics, which went against the popular gangsta attitudes of rap at the time. Their debut album, Overcast!, was released in 1998 and is now widely regarded as an underground hip hop classic. Over their two decade career, the duo has released seven studio albums and ten EPs; their most recent release being 2016's Fishing Blues.