Trap Lord ASAP Ferg will be hitting up 33 cities this Fall on the Yedi Tour, and he's touching down at Stage AE on Thursday 7th November 2019! Ferg is celebrating the release of his new EP, Floor Seats, which was released in August and is stacked with special guest features from some of the hottest names in hip hop! He'll be joined on his tour by support acts Canadian producer Murda Beatz and Atlanta rapper MadeinTYO, plus special guests, so watch this space! 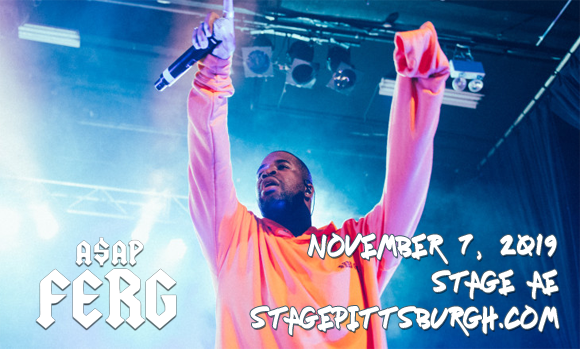 Hailing from New York City, American rapper and songwriter A$AP Ferg began his career as a member of the hip hop collective A$AP Mob, before building a name for himself as a solo artist as well. He released his debut single, "Work", in 2012, appearing on the A$AP Mob mixtape Lords Never Worry. The single led to a joint record deal with RCA Records and Polo Grounds the following year and in June 2013, he released his debut album, Trap Lord. Trap Lord debuted at number 9 on the Billboard 200 chart and featured guest appearances from ASAP Rocky, Bone Thugs-n-Harmony, French Montana, Trinidad James, Schoolboy Q, Waka Flocka Flame, Aston Matthews, B-Real and Onyx. His debut EP, Floor Seats, is due to be released this year.