The lords of thrash metal Anthrax & metalcore kings Killswitch Engage have joined together in a mighty union for the Killthrx Tour, which comes to Stage AE on Sunday 9th April 2017!

"ANTHRAX and KILLSWITCH will be a really good blend for fans," said ANTHRAX's Charlie Benante. "We both play metal, but we play two different forms of the genre. I think fans of both bands are in for a 'Total Explosion of the Senses.'" Added the band's Frank Bello: "This ANTHRAX/KSE tour is a powerful ball of energy ready to unleash the metal in the U.S."

"ANTHRAX and KILLSWITCH — KillThrax! Holy crap!," said ANTHRAX's Scott Ian. "I am so excited about these upcoming shows with our old friends KILLSWITCH ENGAGE. Get out your pit pants and start stretching now for all the glorious action and fun!" 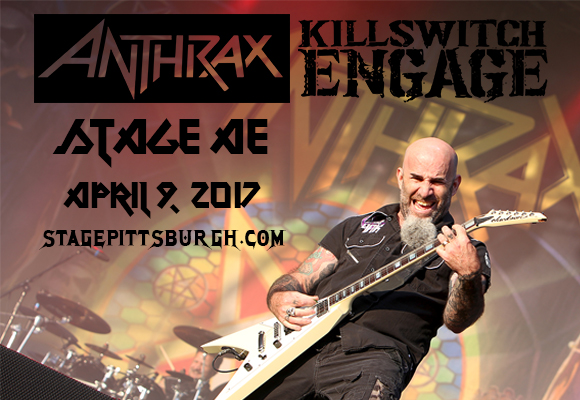 Renowned as one of the “big four” thrash metal bands of the 1980s (alongside Metallica, Megadeth and Slayer), Anthrax was formed in New York City in 1981 by guitarist Scott Ian and bassist Dan Lilker. Their third studio album Among the Living (1987) is considered the band's commercial breakthrough, peaking at number 62 on the Billboard 200 and certified gold by the Recording Industry Association of America (RIAA) and silver by the British Phonographic Industry (BPI). their fourth album, State of Euphoria (1988), did similarly well, peaking at 31 on the Billboard 200 and receiving gold certification in the US. In 1993, the band was offered a reported $10 million, five-album deal with Elektra. The band has experienced multiple line-up changes, with a number of different vocalists over the years including Neil Turbin, Joey Belladonna, Dan Nelson and John Bush, and has varied in sound and musical direction, but has retained a solid fan base. To date, Anthrax has released eleven studio albums, five live albums, seven compilation albums, ten video albums, six EPs, twenty-six singles (including a collaboration with American hiphop group Public Enemy) and twenty-six music videos. The band sold 2.5 million records in the United States from 1991 to 2004, with worldwide sales of 10 million.