Epic line-up for any ska fan! The 311, New Politics & The Skints are ALL coming to Stage AE on Thursday 6th July 2017!
The multi-platinum act, 311 are back on the road to bring their latest studio album 'Mosaic' to their fans in a LIVE show! As they travel across North America you can grab the chance to be there.

The Skints are a Reggae group hailing from London, England and now they are spreading their music across the US. Catch them as they join forces for this unmissable show!

“We wanted a title that pointed to our collective nature. Something that referred to the eclectic style of our music and the bond between the band members and our fans-and this title really captures that.” 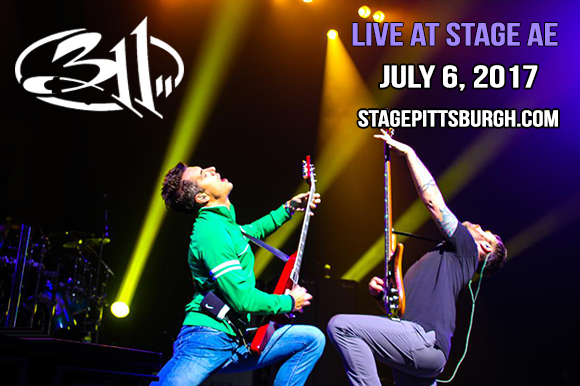 American rockers, 311 (three-eleven) have been getting a name for themselves across North America since their debut back in 1988. The band includes; vocalist and guitarist Nick Hexum, lead guitarist Jim Watson (who would later be replaced by Tim Mahoney), bassist Aaron "P-Nut" Wills. and drummer Chad Sexton.

These guys are the real deal with an impressive eleven studio albums released, two live records as well as several eps and live DVDs – plenty of opportunity for fans to get their hands on and ears on. Now they are hitting the road for 2017 – its bound to be another massive year for them!