Ho ho hold on to something, because it's time for the wildest show of the holidays – 105.9 The X's Kick-Ass Christmas! This year, the annual festive rock-out features live music from The Struts, Glorious Sons, The Blue Stones and Gene the Werewolf! They'll be decking the halls of Stage AE with some seriously good rock and roll on Saturday 1st December 2018, so book your tickets now and get ready for the most Kick-Ass Christmas you have ever known! 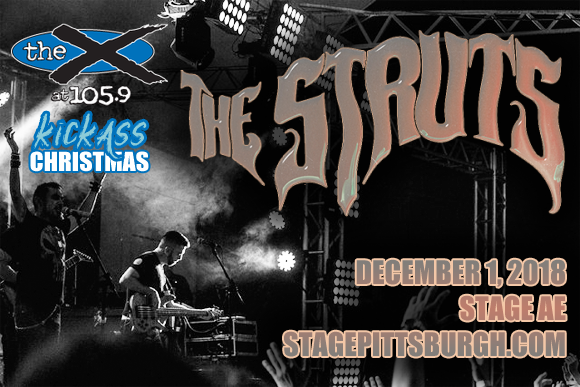 The Struts are an English rock band that formed in 2009. Originally signed to Future Records, the band later signed to Virgin EMI when Future closed, and they released their debut EP, Kiss This, on the label in 2014. Later that year, the band released its debut studio album Everybody Wants, which was successful on the UK charts and received positive reviews from critics. The following year, The Struts signed to Interscope/Polydor Records and they released their debut US release, the EP Have You Heard, in August 2015. In January 2016, the band re-released Everybody Wants on Freesolo/Interscope Records/Universal Music Canada with an additional five songs that were not included on the original UK release. Two years later, having just completed a tour supporting the Foo Fighters, the group released its second studio album, Young & Dangerous, in October 2018.